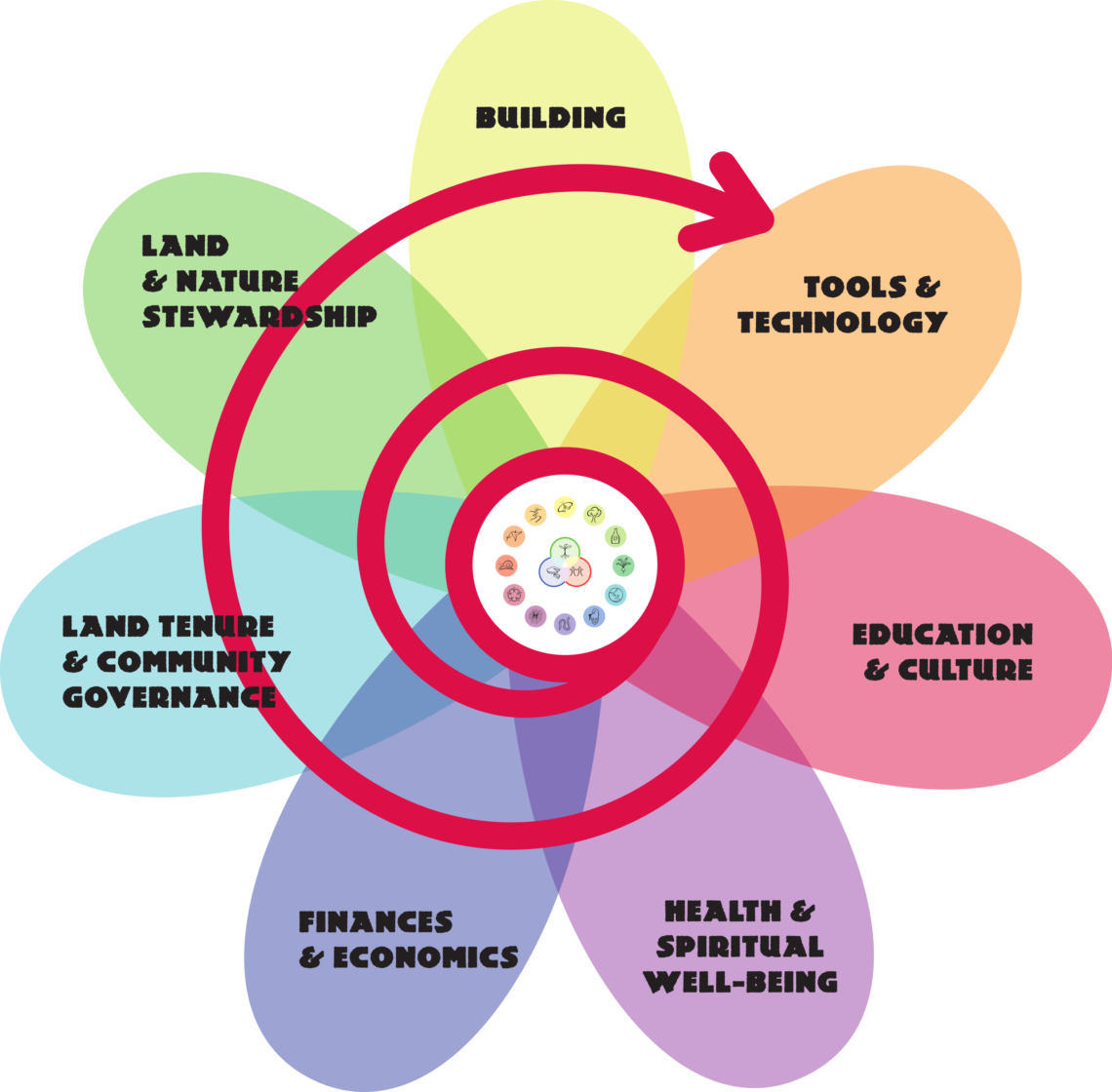 I keep returning to David Holmgren’s Permaculture Flower. It called to me even before we started the Environmental Change-Makers group, and it still has meaning for me today.

Always, the Permaculture Flower diagram has felt like a tidy way to describe “all the things” — all the realms of human endeavor, all the focuses or sectors of our contemporary society, all nicely summed up in one little diagram.

Back in the early 2000s, the Permaculture Flower diagram served as a reminder: To move us toward “sustainability,” transformative change had to happen in each and every petal. Instinctively I knew each petal was fraught, thought I couldn’t have pinpointed exactly how.

As of Change-Making work deepened, and more science emerged on climate, I knew: each petal of the Permaculture Flower would have to be decarbonized, all were entrenched in fossil fuels. That was another facet of “transformation.”

Learning about Biocapacity added another layer. Each petal would need to dial back how much earth resources it demanded. Which required a massive shift in The Economy, away from profiteering, away from extreme capitalists hoarding world wealth that should rightfully be part of the Commons.

Roll forward to 2020, and it became clear how every petal of American society needed to weed out white supremacy. Add to that the concept of colonization — yes, every petal of our contemporary society rests on a bloody history of colonization, which is an important understanding as we seek to decarbonize, to walk back consumption and the more-more-more Economy.

Now, in 2022, it can feel like each petal is “coming apart at the seams.” Is the whole flower crumbling?

The process of transformation

It’s important to remember this is a phase in the overall process of transformation. We are in transition.

Women who’ve given birth, and people who’ve attended a birth, know the word “transition” describes THE MOST INTENSE phase of the birthing process. In natural childbirth, transition hurts like hell, it’s all too much, it’s where you want to pick up and run, quit this ballpark, get the heck out of there — but you can’t. This baby’s gotta come out!

In earlier phases of the birthing process a woman might have been able to pace, walk it out, trying to get things to “move along.” But by the transition phase, there’s not a ton you can do. You’re beyond walking, often beyond speaking, beyond communication with the outside world. It’s just you and intensity — with only one way out.

Dare I say: as a society, we’re just entering the transition phase. Unfortunately there’s plenty more to go before we hold the new-baby-transformed-society in our arms.

Right now we might feel the pain in a few of the Permaculture petals. But the birthing process says ALL will light up in nearly-unbearable pain before it’s time for the dramatic pushing, before that new life slides out.

There is no escape. I’ve heard that people are moving to Portugal to “escape” the political turmoil in the U.S. But remember, every petal of the Permaculture Flower needs to transition. Because the effects of fossil-driven industrialized culture are everywhere, because climate catastrophe and environmental degradation are everywhere, because The Economy is now globalized, with metastasized fibers everywhere, resting on the top-heavy foundation called colonization — the pain of this transition will be everywhere before it’s over.

But it will be over. We will come through this. What we’re going through is a natural process, a natural phase in this living organism called “human civilization.” It doesn’t happen often (Joanna Macy reminds us it last happened around the mid-1700s to mid-1800s, and before that circa 10,000 BC — see her video) so to us alive right now it feels totally exceptional.

When you plan for natural childbirth, you write a birth plan. The attendants you choose — mine included my husband, my best friend, and the midwives — know what will soothe you, what you’ll want. Will it be warm baths, soft music, candlelight?

What will soothe you as the whole Permaculture flower — all of society — goes through transition?