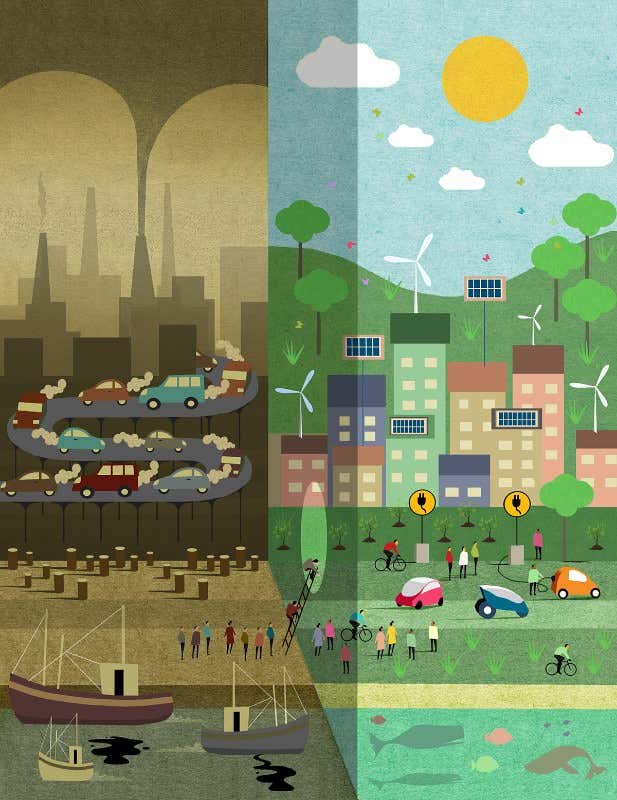 Let’s get started with a story. Really, several stories — or versions of reality, or ways people view the world.

Three Stories for our time

The first set comes from Joanna Macy, who refers to herself as an “ecophilosopher.” For decades, she has been helping people wrap their minds around the enormous changes that are going on at this point in human history. She’s trained lots of people who offer courses and trainings under the idea of “The Work that Reconnects.”

Macy says: “In the industrialized world today, the most commonly held stories boil down to three. We have found it helpful in workshops to present these three stories as all happening right now; in that sense, they are all ‘true.’ We can choose the one we want to get behind, the one that seems to hold the widest and most useful perspective.” (Macy & Brown 2014).

The first story Macy shows us is Business As Usual. This is the story of the Industrial Growth Society, the story that humanity is on a linear path of greater and greater improvement. More, more, more, glossy shiny new stuff. This story encompasses Western Civilization, the economy, and the mainstream definition of “progress.” This story not only accepts growth as good, but does everything it can to continue to prop that up.

Macy says “We hear it from politicians, business schools, corporations and corporate-controlled media …[and] the central plot is about getting ahead. Economic recessions and extreme weather conditions are just temporary difficulties from which we will surely recover, and even profit.” (Macy & Brown 2014).

In fact, the whole concept of “normal” in U.S. society is currently dictated by the Business As Usual perspective.

A second story is the story of The Great Unraveling. Macy says this is the story “we tend to hear from environmental scientists, independent journalists and activists. It draws attention to the disasters that Business As Usual has caused and continues to create.” (Macy & Brown 2014).

When you hear the panic — the sky is falling, we’re at a tipping point, the great collapse is right around the corner (or it is happening all around us) … environmental panic, even social and political panic — that’s the perspective of The Great Unraveling.

The third story Macy describes is that of The Great Turning. Macy isn’t the only one who uses this term. David Korten wrote a book by this title, and the term was central to work by Rob Hopkins and others.

In Macy’s words, this “is the story we hear from those who see the Great Unravelling and don’t want it to have the last word. It involves the emergence of new and creative human responses that enable the transition from the Industrial Growth Society to a Life-Sustaining Society. The central plot is joining together to act for the sake of life on Earth.” (Macy & Brown 2014).

But Macy’s three stories aren’t the only perspectives.

This excerpt comes from a collaboration of Indigenous people from several parts of the world. We will revisit the full message later in this series.

Indigenous cultures often share the view that there is no good, bad, or ideal—it is not our role to judge. Our role is to tend, care, and weave to maintain relationships of balance. We give ourselves to the land: Our breath and hands uplift her gardens, binding our life force together. No one is tainted by our touch, and we have the ability to heal as much as any other lifeform. …

Indigenous cultures often see Earth as going through cycles of continuous transition. We currently find ourselves in a cycle of great decomposition. Like in any process of composting there is discomfort and a knowing that death always brings us into rebirth.

Within this great cycle, we all have a role to play. Recognizing and healing all of our own traumas IS healing Earth’s traumas, because we are ONE. (Angarova et al 2020)

From the perspective of The Great Turning

In this series of posts, we’ll come primarily from a perspective of The Great Turning. We’ll explore the many ways people are putting in place new and creative responses, facilitating this grand transition.

The perspective of The Great Turning means we will take a look at The Great Unraveling, however we won’t allow it to have the last word. Our primary focus will be on what people around the world have been doing with our human capacity to heal.

To me, this is a place of great possibilities. It invites a path for creativity. It feels like progress, and some may call it course-correction, but perhaps it’s simply evolution — evolving out of Business-As-Usual which has been drilled so deeply into our consciousness.

Throughout this series you’ll see that means evolution in the physical tools and technologies we use in everyday life, but also in our thinking, in our philosophies, in our perception of the human place within the big picture of life on this planet. To me, The Great Turning inspires hope.

(There are no wrong answers.)

Now that you’ve identified which story has been dominant to you personally, take a look at the other stories. What do they feel like? How do they integrate with or conflict with your go-to understanding of the world?

What is the "What We Can Do" project about?

Introducing the What We Can Do series