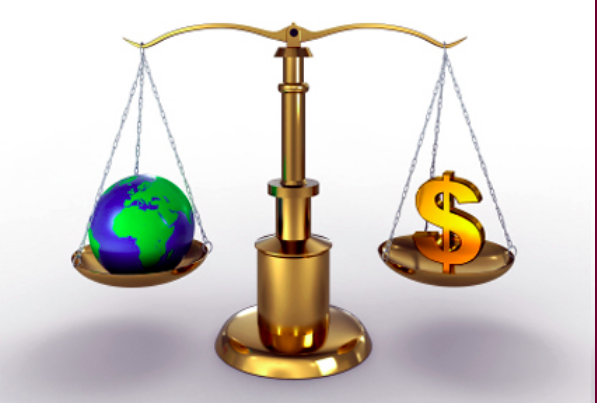 Pick apart any environmental or social problem you can think of, and you find that The Economy is running the show. Our society has made many of these errant choices because of The Economy. If we’re going to solve any of the problems — climate, biocapacity, species extinction, racism — we’ve got to solve The Economy.

An extractive economy is a capitalist system of exploitation and oppression that values consumerism, colonialism, and money over people and the planet. The extractive economy perpetuates the enclosure of wealth and power for a few through predatory financing, expropriation from land and commonly accessed goods/services, and the exploitation of human labor. An extractive economy views natural resources as commodities, using an oppressor mentality to expand the free-market logic into all cycles and functions of the Earth.
It places a price on nature and creates new derivative markets that increase inequality and expedite destruction. It digs, burns, and dumps with no regard for the impacts on communities and uses force to undermine democracy, community, and workers. (United Frontline Table, 2020, p.6-7)

When I mention the economy, you probably think about all the big stuff: the tall gleaming skyscrapers, the air flights, the stock market, the credit cards. When I say The Economy, with capital letters or air quotes, that big stuff is what I’m talking about. In this unit we’re going to talk about The Economy, and why that isn’t likely to continue, why it cannot continue.

It used to be that The Economy was like a smooth flat sidewalk, headed gently uphill. Before the early 2000s, if you had money to invest, you could pretty much count on growth. Your salary, the value of real estate, your investments, pretty much anything you put your money into would slowly and steadily grow.

Along came what was then called The Great Recession. Some families lost everything, and a large segment of the population never regained their footing. Sure, the financial press declared that recovery had happened, and things were back to “normal.” They used the dramatic figures of the Dow Jones to prove it. But with underemployment, huge debt burdens, and broken dreams, for many families things were still fairly disjointed in late 2019.

Then along came covid-19. Millions experienced sudden unemployment. Businesses, even entire industries, were wiped out. Covid took the problems intrinsic in The Economy and gave them a cruel twist, making them much, much worse.

Let’s take a look at three enormous problems that are woven into the very fabric of The Economy.

These massive problems were existing, and getting worse, well prior to any of the events of 2020. Let’s examine them one by one.

As we covered in the Understanding Peak post, some of the economic distress we’ve been experiencing in the 2000s can be tied to hitting peak in one resource or another, in one social structure or another — we’re seeing the economic fallout from those peaks.

Taking oil as an example, although the price of gasoline at the pump came down a little, it is nothing like it was three decades ago. Why is three decades ago significant? Because that’s when people built up many of the economic structures that The Economy uses as foundation these days, as a basic presumption of the way to operate. These economic structures include outsourcing, overseas manufacturing, globalization — all of which rely upon cheap unlimited transportation, which means oil. (See related post about how Debt and borrowing are tools of those expansion times)

All of these techniques were popularized during the great ascent, the accelerating — and exhilarating — first half of planetary supplies. These economic structures are techniques of the ascent: they are tools which work during times of economic growth. But The Economy continues to use these economic structures today, despite a contracting economy and peak, or nearly-peak, scenarios.

Stated differently: These are tools which were designed for times of growth, yet The Economy continues to use them and rely upon them during times of contraction.

Official economic statistics have hidden the probability that the Western economies have been in a zero-growth phase for at least twenty years. Whatever growth there has been has come largely from such things as real estate bubbles, the prison industry, health care costs, insurance and financial services, educational costs, the weapons industry, and so forth. The more expensive these are, the more the economy is assumed to have grown. (Eisenstein, 2011, chapter 12)

The second enormous problem which is undermining The Economy is the environment. The cost of climate change and climate impacts is growing. We see farm losses from catastrophic climate disruption. Hurricane destruction, floods, droughts. Buildings and land acreage lost to sea level rise. Destruction of infrastructure and underground utilities through saltwater incursion.

The losses are piling up. And industries such as the reinsurers, the companies that insure the insurance companies, understand the expense is going to get much, much worse.

But climate change isn’t the only cost. We also have other issues like the decline of bees and pollinating insects, which is already beginning to affect agriculture in major ways. We have infrastructure and water issues which are affecting cities and entire industries. The list goes on.

One thing to understand about “the environment versus The Economy” is: it’s a false dichotomy. These two concepts aren’t truly in opposition. That’s a misunderstanding of how the real world works.

Anytime you hear major figures in government or industry saying “oh, but we can’t put in that environmental protection, it will cost too much,” you know right away that they believe in this distorted model.

The third enormous problem with the economy is about wealth distribution.

The way it is today, a few families, a few individuals hold the lion’s share of wealth in this country. Most people hold very little, some hold next to nothing.

For a great explanation of this, I recommend the following video, “Wealth Inequality in America”:

First, let me point out that the “Wealth Inequality in America” video is from around 2012. Since that time, the disparity has only gotten more extreme. In 2016, the people on the lowest end of the scale (left side of video image) actually started to go negative, so that they were no longer holding wealth, they were owing debt.

And meanwhile all of us kept channeling our spending, our purchasing power, as fast as we could, into the pockets of Mr. Big, Mr. 1%. We were sending our money away to the massive international corporations, owned by the 1%. (How does this happen? See Understanding working capital – link to come)

Focus for a minute on those terms: the 1% and the 99%. In 2011, activists began drawing attention to this concept of wealth disparity. Back then this was a fairly new idea, most people hadn’t realized this gap was so huge, and very few people talked about it. As the economy went through what was then called “the Great Recession,” activists began protesting wealth disparity, and a movement called Occupy Wall Street came into being.

If you don’t know about Occupy Wall Street, there’s an excellent video from that time which shows scenes from New York protests, and explains the movement and what people were fighting for.

That summer, there were Occupy camps at City Halls across the country, including at Los Angeles City Hall. The Occupy movement brought terms like the 1% and the 99% into our vocabulary. Beyond the history lesson, what’s important is: beginning in 2011, for the first time we had a way of talking about this gigantic gap.

Rolling forward to today, although we still use the term “1%,” what we really should be talking about is the .01%, an almost infinitesimal number of people globally, who hold and control a gigantic share of the planetary wealth.

For purposes of this posting series, I’m going to refer to these obscenely wealthy people as “The Man.” Yes, it’s appropriate to say “man,” because for the most part these extremely wealthy individuals are men. Mostly, white men. Forbes magazine maintains a list of them, if you want to see exactly who they are.

An Oxfam report in January 2020 said

Shortly after that Oxfam report, COVID-19 made it all much worse: Millions unemployed. Business losses. Entire industries wiped out, for instance the restaurant industry. Rent turned into debt hanging over people’s heads. Hundreds of thousands of families grieving losses of friends and family members. The cost of covid retrofits. The medical system’s costs due to covid. Covid survivors with serious disabilities. We have lost purchasing power. We have looming homelessness. We’ve lost business networks.

A report by Swiss bank UBS found that billionaires increased their wealth by more than a quarter (27.5%) at the height of the crisis from April to July, just as millions of people around the world lost their jobs or were struggling to get by on government schemes. (Neate, 2020)

Some financial press anticipate that as we remerge from covid we’ll see a “K-shaped recovery.” What that means is that there will be a split in experiences. One portion of the population will experience a return to so-called “normal” operations and eventually “normal” degrees of affluence — perhaps the “roaring 20s” some financial pundits write about.

But another portion of the population is in dire trouble.

And meanwhile, The Man, Mr Big, Mr .01%, has made obscene profits on covid-19, and is even wealthier than ever.

The OxFam January 2020 report said: “If everyone were to sit on their wealth piled up in $100 bills, most of humanity would be sitting on the floor … A middle-class person in a rich country would be sitting at the height of a chair. The world’s two richest men would be sitting in outer space.” (OxFam, 2020)

Consider where you and your family would be sitting.

If you and your family would be sitting at or near the floor, what would you like to teach to other activists about that?

If you and your family would be sitting anywhere above the floor level, how might you use your privilege (because elevation above floor-level is indeed a privilege) to help?