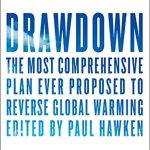 The concept of the book Drawdown (2017) is a fascinating one. Paul Hawken and his specially selected team set out not only to list many potential global warming solutions, but also to analyze the amount of potential that each of those solutions had to offer. They employed a team of scientists and high-level thinkers to analyze CO2 reduction, net cost and net economic savings for each of the solutions posed. That in itself was a unique and monumental effort.

Drawdown lists many solutions in categories such as energy, food, buildings and cities, land use, and of course transport and materials. But it also has some unexpected items such as “marine permaculture,” “perennial crops,” and the reversal of desertification. I was excited when Drawdown came out, and I couldn’t wait to see what solutions they might suggest.

Yet once I had this weighty book in my hand (it has plenty of colored pictures, so even as a paperback book it packs quite a few pounds), I was disappointed. Pretty nearly all of the solutions posed by Hawken’s team are what I consider “big think” — things that big companies, big agriculture, and government should be thinking about. There was next to nothing about individual lifestyle change, grassroots potentiality, and above all, culture change — adjusting our way of thinking, and the messages we tell each other, so that these new directions in society become the ethical way to be. There was nothing in there for us little guys to DO.

I wanted to like this book. I mean, just look at that subtitle – how could I not want that? But the bottom line is that the book Drawdown doesn’t fulfill the brilliant promise of that subtitle. Despite the word “comprehensive,” the book leaves out some critical parts of the equation: the people, and the social pressures of enculturation.

Yes, Mr. Hawken, it is important to tell big companies and government what the appropriate direction of the future will be. But at the same time, none of those solutions will truly stick — they won’t be supported economically, they won’t be supported by the buying patterns of the American public (which will undermine the solutions, because corporations in search of profits will run right back to the old polluting ways), if we don’t make the cultural shift at an individual level.

Over the past half-dozen decades, big corporations have made a profound effort to train and sculpt the buying public into becoming mindless consumers. We need to roll back this mindlessness and retrain a vast public to think about their actions — and I’m speaking particularly about adults who are no longer connected with schools. Therein lies an enormous re-education project. And Drawdown does nothing to address that.

It seems like the solution of Hawken and team to this cultural problem is: “buy our book” (physical object) and hand it out to friends. This approach is just more of the same — with buy-buy-buy economics, the focus on physical stuff, and transportation to move the physical objects around the planet, the method of Drawdown compounds the very problem it was supposedly trying to correct.

Drawdown itself is a hefty intellectual-level read. I say that as someone who reads a lot of nonfiction: this one is challenging. It’s as if it was written by scientists for scientists, and they added pretty colored pictures as an afterthought.

But overall, Drawdown did not give me the elation of possibilities. It came across as a treatise on what the big guys should do, and gave a distinct impression of “you little guys can’t do very much” (which felt a lot like the next phrase would be “so just go shopping”). This creates what is in my opinion a very dangerous message, that someone else will handle this problem. Nothing could be further from the truth!

If you’re looking for something that tells what you can do, within your own control, to begin creating meaningful change right NOW, Drawdown is not your book. For something more engaging and grassroots focused, I suggest you look to other titles on my list.

What can we do about individual lifestyle change, grassroots potentiality, and culture change? There are plenty of answers. Stay tuned, I plan to review other books that fill this gap.

If you’re interested in grassroots climate solutions, check out ClimateSolvr

Breathe in the gap (ClimateSolvr #9)