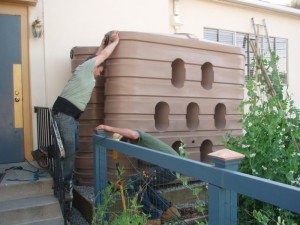 We have 4 different types of rainwater harvesting demonstrated at the Community Garden at Holy Nativity in Los Angeles.  You are welcome to come and see them, and copy them at home.

Ours are Bushman tanks. They have a first flush diverter feature (see fat tube attached to the wall), which clears out leaves, debris, animal droppings before water goes into the tanks.

Rainwater tanks are expensive, and require a large place in your garden to put them. They will be VERY heavy when full of water, so you need to construct a really secure footing. Our footing is an example of what NOT to do, because the contractor was learning and he didn’t do it right. As a consequence, we have been taking “band-aid” measures to cope with settling, for years. Have yours installed properly by a veteran installer!

One important thing to know about rainwater storage is that you have to use it differently. When you water your garden with a traditional garden hose, you’re used to opening the valve and having water spray out the end — under pressure. Our municipal water supply is pressurized, thus hose-end attachments like sprinklers and fan sprayers work. With harvested water in a tank, you have very little pressure — only the pressure of gravitational “drop.” Thus when using water from a rain tank, it comes out more like a slow trickle. That changes your gardening habits a lot!

A home-scale rain barrel is in the courtyard, to illustrate what you can do at home. This barrel holds 55 gallons, and can be “daisy chained” which means several barrels can be attached one-to-the-other to store more water. 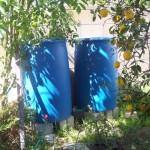 Home scale barrels are often made from materials that are reclaimed from the city’s waste stream, such as barrels which used to contain food oils. Rain barrels are often cheap to purchase, and some cities are offering discounted purchase programs (see TreePeople webpage for latest info).

When you get a home-scale barrel, look for the following:

Install your rain barrel on a secure, well-compacted surface. When it is full, it will weigh nearly 500 pounds! Barrels are often placed on top of cinderblocks, to raise the barrel a bit so that you can fit a watering can underneath the outlet spiggot.

To look at the narrow strip of citrus trees between the blacktop driveway and the yoga center pathway, one wouldn’t see much besides a garden with a few rocks. However beneath the surface there is a low-tech — and HIGHLY EFFECTIVE — rainwater harvesting system. 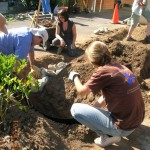 The result is that the trees think they are growing in a lot more water than they really are. And perhaps more importantly, the water is delivered to the trees deep in the earth, where their roots are. This encourages the trees to grow deep roots, which helps make them much more drought-tolerant.

In the years we have had the rainwater harvesting garden, we have observed carefully with each rainstorm. The mulch is never disturbed. That means that all the water from the yoga center roof is infiltrating — soaking into Mother Earth rather than being sent to the storm drains. We regard this system as our most successful rainwater harvesting feature.

On the south side of the Community Hall, there are no rain gutters. The water runs off the edge of the roof and hits the ground.

We have used earthworks to retain and infiltrate the rainwater. We constructed a very low-tech Berm-and-Swale configuration, which is very effective in keeping the water on the property, and soaking into the soil of the Garden.

A “berm” is simply a long ridge of earth. We built a berm along the property line, to prevent water from running off onto the neighbor’s driveway. Rain falls off the edge of the roof, and soaks into the mini-orchard.

The “swale” part is what is behind the berm. In non-drought years, the swale in the mini-orchard is a lively place of edible plants, perennial edibles, and beneficial-insect-attractant flowers (admittedly, it is suffering a bit in 2015 with lack of rainfall). 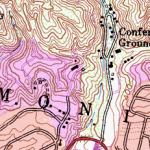 In permaculture design, berm-and-swale configurations run along the contour of the land. Think of the lines on a topographical map; your swale would run along each line. This serves to hold the water in-place so that it can infiltrate.

Note that, facing a year of Godzilla El Nino rains, we must design our swales so that there is a non-destructive overflow channel, in case your rainwater harvesting gets overwhelmed by the storms.

You are welcome to drop by the Community Garden anytime for a self-guided tour! The Garden is at 6700 W. 83rd (83rd at Dunbarton), Los Angeles 90045, and has no gates – most of it is open to the public all the time. If you want to talk with the Garden Team, you can count on finding us every Thursday afternoon/evening (a casual 4:30pm till about 6:30 or so) except for major holidays.

A new perspective on "what is Resilience?"