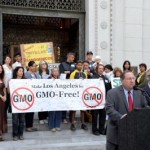 Don’t call them “genetically modified” says the FDA.  In a campaign that is very likely driven behind-the-scenes by the marketing arm of biotech industry, the FDA now wants us to use the term “genetically engineered” instead.

Why is this so appalling?  Because the American public is just beginning to wrap their minds around the term “GMO”.  That little combination of three letters is gaining widespread comprehension — “brand recognition” you might say.  Recognition that it is the Death Star of our global food supply.

And now that people are starting to recognize all the horrible health and environmental impacts of GMOs , we’re supposed to change-out the language.

It’s a blatant marketing tactic to confuse the public.

A recent LA Times article explained that the term “genetically modified organism” is scientifically meaningless (although the LATimes explanation is quite flawed and biased – see below), and that what activists are opposed to is more properly called

Splitting scientific hairs, they are techincally correct.  However this campaign smacks of marketing propaganda.

If the public is just beginning to recognize the term “GMO”, hey, biotech heavies will simply change-out the term, so that the public won’t see those recognizably evil letters on product packaging.

What we activists should do

We should use the technically-correct term “genetically engineered” interchangably with the more widely recognized “GMO”.  We should add this broader vocabulary to all of our education.

But I don’t think we should drop “GMO” entirely, because so much of our past educational campaigns have been built upon it, and that old three-letter combo brings along masses of people whom we cannot reach right away.

The change-out in “preferred language” is very likely a response to all the headway that GMO activists have accomplished in widespread education of the general public.  It is a sign of our success.  And now biotech wants to undermine it.

The LATimes article erroneously lumped traditional plant breeding into the fray, referencing the genetic evolution that takes place in nature.  The LATimes erroneously applies the same “genetically modified” nomenclature to natural breeding processes, as they do for unnatural lab-created alterations.  This too, is biotech industry propaganda — an effort to confuse the public, generated straight out of their corporate offices.

The significant difference is this:  in lab-created genetic engineering …

“engineering genes into a recipient plant’s DNA is nearly always accompanied by small or substantial deletions or rearrangements of recipient plant DNA, insertions of DNA sequences not intended for insertion” (in other words: unintentional mutations are very common) — Latham 2006, paraphrased by genetic engineer Belinda Martineau, phD in “Crop Genetic Engineering is a mutagenic process”

Perhaps we should just call it what it is:  WE DON’T WANT FRANKENFOOD!

El Niño: What to check on your downspouts