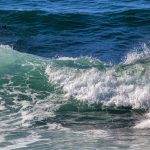 In case you missed it, there was a well-written article in the LA Times about sea level rise and the California coastline. According to the article, the sea is now rising here on the west coast faster than anywhere in the world.

Sea level rise threatens not only ocean-front mansions and popular beachside restaurants. It will lead to erosion of ocean-facing cliffs, such as killed 3 people in Encinitas this month.

It will also disrupt benefits we take for granted, that serve more than just coastal residents — things like public beaches, wetlands, and municipal infrastructure such as highways, train tracks, water supply, sewer lines, and more.

“… we have never before dealt with the fact that Mother Nature’s going to do what she’s going to do, and we can’t do anything about it. ”

The article examines several different responses that coastal cities are taking: temporary measures such as seawalls and sand replenishment, and how they don’t solve the problem. And it presents a well-rounded and sane view of managed retreat. Read the LATimes article here

play with NOAA’s interactive map for sea level rise here
note that at a mere 2ft of sea level rise, much of Venice, Mar Vista, the Marina, and Venice Beach are in jeopardy during storms, and relatively new sections of Playa Vista are underwater.

The sounds of silence