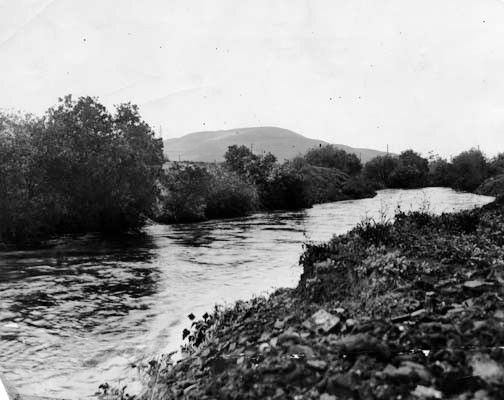 The land where I have planted gardens is located on the bluffs above the area where there once was a village called Sa’Angna (1)(6)(7). To the best of my understanding, these lands were taken from the Kizh nation (pronounced Keech)(3).

When the Spanish colonized the area, they called the Kizh people the Kichireños, which meant “people of the willow houses”(3). The Spanish forced many of the existing people –and from my research it sounds like this included the Kizh– to relocate to the area around the San Gabriel mission, where they were basically enslaved to build the mission (3). Many peoples were folded together under the name Gabrieleño (a Spanish name, which describes them in terms of the mission where they were enslaved) (9). With racist suppression and forced assimilation, including the forced use of Spanish and English rather than native languages, the name Kizh was mostly lost, even to many descendants.

From what I can understand, “Tongva” is a broad name that is embraced by scholars (5) and has only been in use since 1903 (9). Some ancestors of the Kizh people object to the name (3). However the State of California only recognizes the “Gabrieleño” designation (or “Gabrieleño/Tongva”? I’m not sure), and the U.S. federal government refuses to recognize even that. It sounds like Kizh descendants have a choice between embracing the “Gabrieleño/Tongva” names or losing what (little) official recognition they are granted under current law. Meanwhile it sounds like there is conflict over how this plays out today between factions within the grouped “Gabrieleño/Tongva” designation (8).

When the Kizh people were forcibly relocated, their land was taken. Nearly a hundred years later, a series of woefully inadequate settlements were paid on their land claims. History in the intervening years included “lost” treaties, refusal to properly recognize tribes as official within the eyes of the State of California and the U.S. federal government, and legal processes which undermined the legal claims of the descendants (4).

Which means that, although I “bought” the land my house stands on, and that purchase is perfectly “legal” under the State of California’s property laws, that transaction stands upon a foundation of racism, suppression, injustice, near-slavery, trickery, and taking. Also, from the perspective of many native peoples, the whole idea of “land ownership” is called into question.

Where does that leave me? As whites who have profited by our predecessors’ actions (I don’t say “ancestors,” because mine didn’t come from around here) and our whiteness, the first thing I need to do is to acknowledge the atrocities. I cannot just motor over them and go on as if nothing happened.

Edit: Several more things we can do (10)

Since the Kizh nation is the oldest of the names I could find, I’ll refer to that until I learn more, in order to do my best to honor the people who once lived on these lands.

Word of the day: Liminality