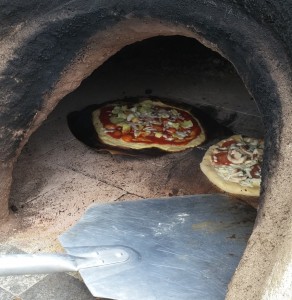 It’s no secret that we built a community-scale wood-fired bread-and-pizza oven here in Los Angeles.  And that we hold monthly Community Bake events in conjunction with Los Angeles Bread Bakers so that anyone can try their hand at baking in it.

But … what if you’re gluten-free?  Does that count you out?

After years of serious gluten-free living, I eased up a bit (and the monthly presence of totally-awesome artisan baked goods in my life has certainly had a lot to do with it), but I really want to get back to it.  Or at least closer.  Meanwhile we have these monthly baking events and I can’t bear to not participate.

I hopped on the ole Google and learned that there are plenty of people out there trying gluten-free pizza crusts.  Not that many are using a wood-fired oven, but a few are using an outdoor grill.  Thus begins the challenge, which will likely take me all summer to resolve:

How do you make a totally awesome gluten-free pizza in a wood-fired oven? – not just any pizza, but one that’s so awesome that artisan bakers are impressed by it…

note: don’t miss the results at bottom of post!

Are you dairy-free in addition to gluten-free?  All but #2 and #3 are either already dairy free, or include DF options in their notes.  And at our Oven events, there are plenty of dairy-free toppings.  (sometimes someone even brings tomato-free pizza sauces!)

At the June 11 Community Bake, I tried the Gluten-free pizza dough with overnight rise – by GlutenFreeGirl  recipe.  … My score: 2.5 out of 5. 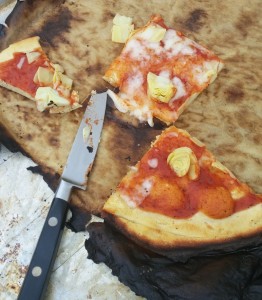 OMG!  Socca!  I never knew it existed!  Socca is a traditional Italian flatbread made with ground garbanzo beans, naturally GF without any adjustments, and oh is it delicious!

Wood-fired oven techniques:  Heat a dry cast iron skillet in the wood-fired oven.  Using barbecue gauntlets, pull skillet to lip of oven and swirl in 1-2Tablespoons of good olive oil.  Push skillet back in for a minute or so to heat, and get your batter nearby.  Pull skillet to lip of oven again, and add in about 1/2 to 1 cup of batter, swirling it slightly like you would a for French crepe.  Slide the skillet into the heat, watch it carefully, and meanwhile get your toppings ready.  Judging from online photos, toppings for a socca seem to traditionally tend toward light quantity with strong, rustic flavors.  When your socca gets slightly tanned, pull it to edge of oven, dash on the toppings, pop it back in to melt/frizzle whatever you put on there, and pull it out.  (trick to pulling it out:  use a metal peel to help lift it, and have a heavy trivet or blocks of firewood ready to place your skillet on, because that skillet will be HOT for a long while.)  remove socca from skillet to prevent socca from overcooking.  With our crowd that was not a problem – onto the cutting board and passed around to DEVOUR!  yum!  I will be making this one again!

Wowza! It was pop-it-in-the-blender easy, and boy, did it disappear fast as it came out of the oven!

My wood-fired oven techniques: Heat a dry cast iron skillet in the wood-fired oven.  Using barbecue gauntlets, pull skillet to lip of oven and swirl in approx 2Tablespoons of good olive oil.  Push skillet back in for a half a minute or so to heat the oil, and get your batter nearby.  Pull skillet to lip of oven again, and pour in enough batter to make a nice “pancake” shape in the skillet. Since mine was a 10″ cast iron skillet, my “pancake” was perhaps 6-8″ in diameter. I spread the “pancake” a bit with a silicone spatula to make sure the batter was an even thickness. you don’t want it too thick. Slide the skillet into the heat of the oven, and watch it carefully. (I don’t have accurate timings for this, because wood-fired oven heat varies so much, and it is CRAZY fun baking at a community oven with so many other people!) Basically, the top of your batter will look a bit drier – don’t wait for it to brown up. Part way through the bake, using barbecue gauntlets, pull the skillet to the lip of the oven, and -using a metal spatula – flip your flatbread. The side that was down should be slightly golden. Bake the second side for less time, but don’t burn it! Some of mine got pretty toasty but they still tasted great. When done, remove skillet from oven. (trick to pulling it out:  use barbecue gauntlets, and have a heavy trivet or blocks of firewood ready, because that skillet will be SUPER HOT for a long while.)  Using the metal spatula, remove flatbread from pan, put it on a cutting board, and slice with a pizza cutter. It is best when it has cooled just slightly.  About toppings for this one, I tried a bit of Parmesan cheese, however the flatbread was so delicious on its own, with all that garlic and oil, that it really didn’t need toppings.  And don’t just take my word for it. Members of the artisan Los Angeles Bread Bakers begged for the recipe!

Jan 2020 update: the Red Lentil Flatbread works fine as leftovers. It is a bit oily, so I slapped the leftover pieces on a cast iron skillet and zapped them under the broiler – just a few minutes, long enough to warm up. This was excellent topped with jarred harissa sauce!

If you enjoyed this post, please consider making a small donation to support my ongoing work. — thanks!

Build your own solar cooker