In case I don’t use sufficiently ‘skillful means,’ please let me begin with stating: I am not advocating for intentionally creating an economic crash.

Rob says about economics “once it starts getting even vaguely complicated, leaves me rather puzzled.” I don’t shy away from complicated, although I do strive to simplify things as I explain them, so that more people can understand.  I have waded through tons of what many people lay out as possibilities for new economic alternatives, hunting for how to successfully unwind the terminally-flawed system we’ve got (success=relatively peacefully), and ideas for how to build a wiser parallel system.In Rob’s “One: A Post-Growth Economy = Economic Crash?” most of the thinkers Rob has selected to list — including all the Steady Staters — are missing a HUGE element as they create their post-growth economic pictures, while Holmgren seems to have understood it from the very early days of his Energy Descent curve: that element is Biocapacity, a.k.a. Ecological Footprint. Right now humanity consumes far more, and generates more waste, than the ecosystems of the planet can handle.

A Steady State says: we know the growth thing isn’t so good, let’s quit growth and just hold it steady, right about here. But ‘here’ is at 1.5-planets-worth-of-consumption. Ridiculous tech fantasies of travel to other solar systems aside, we only have one small planet.  We cannot hold steady at ‘here’ — first we’ve got to ease back on the throttle, we’ve got to come back to 1-planet-worth-of-consumption before we’re even ready to strive for Steady.  And as we ease back on the throttle, we’ve got to experience some sort of a Descent.

In his earlier work, Holmgren described this as an energy descent, and a descent in consumption. (Holmgren’s diagram; One way I often explain it) Across the board, it means tremendous change, in everything from our investment systems (see Charles Eisenstein comments on what charging interest does to the underlying enterprise), to our stock markets, to our current system of “jobs,” to our view of what is good to cheer about on the financial pages. 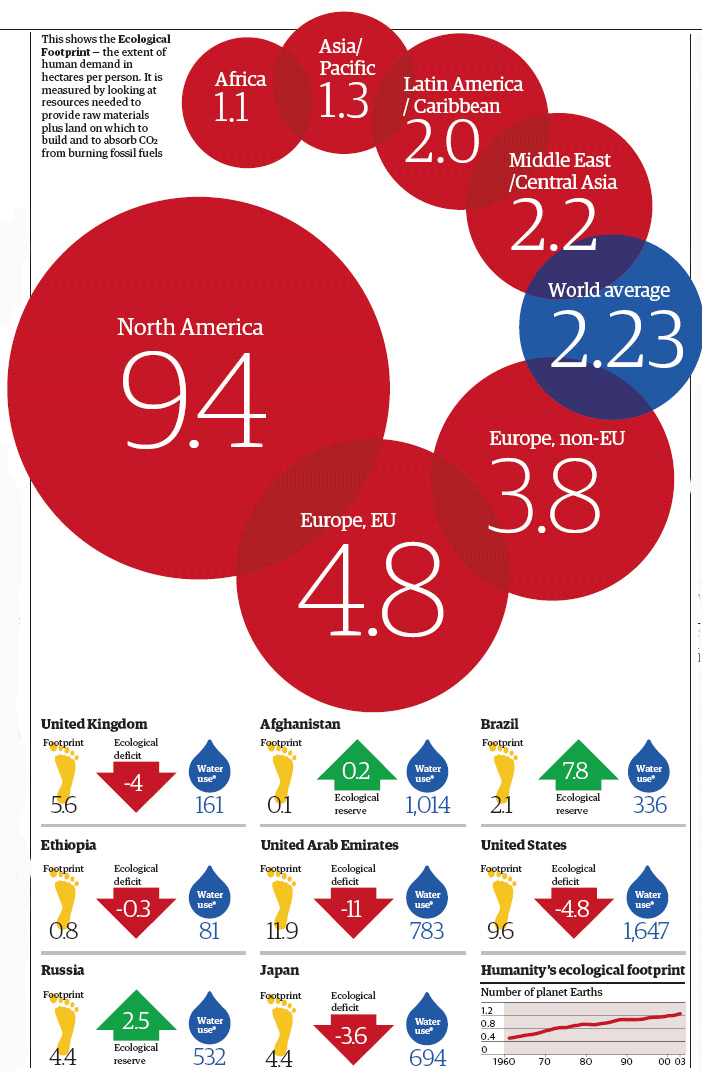 Years ago I saw a diagram from the Guardian that illustrated the biocapacity issue by continent. While I’m sure the situation has only worsened, I still refer to that diagram.  It is missing only one thing: the Permaculture concept of Fair Shares. An appropriate additional bubble on the Guardian diagram would reveal that each person’s Fair Share should be something like 2.12. Thus in North America, at 9.4 compared to that 2.12, we consume at a rate which is nearly FIVE TIMES our fair share. To get back to a level which would even be appropriate to hold at a Steady State, we first need to cut to about 1/5 of our current consumption levels.

That means there’s GOT to be a powerdown.

Does that mean “Economic Crash”? I have stated in other writings: it depends on where you are standing at the time. If your feet are solidly within the new economy, building local resilience, serving core needs, relatively disconnected from mainstream financial markets, then you might be able to shrug at what is happening and go on with your work. If your investments and self-definition remain all tied up in the old, outdated ways, then yes, it probably looks really, really like a horrific crash to you.

Do we need to intentionally create an economic crash? The reality: it’s already underway.

Occupy might not be sitting on as many sidewalks today, but all the issues that drove people to the sidewalks are still there — now more than ever. The divide between rich and poor is widening. The lines at food pantries are longer than ever. The widely-touted “recovery” is completely skipping over vast segements of the population. “Jobs” figures only look good because the numbers get distorted as people give up on the job-seeking system. The stock market has gone effervescent, completely out-of-touch with the hard reality on the street. The people who are chatting about whether we will have an economic crash, haven’t yet been sucked into the power of the inevitably cascading wave.

Rather than debating about whether or not to intentionally create it, I think we should be shifting the discussion to the inevitability of it (=biocapacity), and more importantly: what we’re going to do to cope.

I think it’s all about how peaceful we want it to be. Do we want the bloody Mad Max of Holmgen’s pure, unadulterated “crash” scenario? Or do we want some sort of moderated, planned, creatively engineered type of descent — which is what Transition set out to do, which is what Holmgren described in his “creative decent” scenario.

Holmgren’s early work didn’t really advocate for a position, it merely described the options we had ahead. In my read of his current work, he’s pointing out that our assortment of options are fast drying up, that we’ve painted ourselves into a corner, that by following Brown Tech so far out here, humanity seems like it’s really committing itself to a dreadful crash.

How to shift gears

Our first task is to create a shadow economic, social and even technological structure that will be ready to take over as the existing system fails.
— David Ehrenfeld

You could jump on Holmgren’s attention-grabbing headline and interpret that he is all about actively creating a crash. Or you could read about all the wonderful New Economy businesses that Transition-involved people are creating, and (in my area) tons of not-Transition-involved people are creating — things that have a lot to do with building up Resilience, creating the new infrastructure, sculpting the new future. The resilience-building stories seem much rosier, but are they all that much different?

Rob criticizes Holmgren’s assertion that “a radical change in the behaviour of a relatively small proportion of the global middle class could precipitate such a crash.” But by the pulse-takers of the old, outdated system (old economic indicators), one could say that these New Economy folks are doing just that, by “opting out” of the conventional system.

On one hand we cheer the fact that Annie Leonard’s “The Story of Stuff” is now being shown in schools.  It’s a great thing.  But suddenly it sounds ominously like Holmgren, cultivating that pocket of people Holmgren described, who are boycotting the more-more-more ways, the “as little as 10% of the population [that] has the potential to function as a deep systematic boycott.”

A favorite cartoon from the peak oil folks shows a car roaring toward the edge of a cliff. Rather than hurdling into the chasm, the obvious thing to do is to throw the car into reverse gear and back away from the cliff.

Is that “Crash on Demand”? Is that creative Transition? Is that a carefully engineered shift? Or is that humanity doing what it takes to survive?

A more useful term that has been circulating is De-Growth. The term embraces the need to actively back away from the edge of the cliff (as contrasted with “Steady State” which leaves us suspended Wiley-Coyote-style in thin air over the yawning chasm).

I have written about my own tendency to step carefully around “The C Word” of collapse, because to me collapse implies unbridled chaos. The term I’ve been using lately is “economic contraction” (admittedly another C word). It acknowledges that things must necessarily get smaller, tighter more compact than they have been.

No matter what you call it, in cold reality it’s got to be a Descent — of energy consumption, of consumption-consumption.

Because the old-fashioned economy was built on a cornerstone of perpetual and unceasing growth, Descent turns everything on its ear. It starts an irrevocable cascade of systems which no longer function, unraveling imbedded and incestuous economic systems which are desperately dependent upon growth. Que Nicole Foss, and sorry Rob, it does get horrifically complicated.

[Example: why debt and loans are a really bad idea in a Descent economy]

I think this cascade — the unwinding of the inextricably incestuous growth-dependent system — is what Holmgren was talking about when he used the term “economic crash.” The unwind has absolutely got to happen.

I think that we must do what we need to do to create and climb aboard the new future: a future which is post-carbon, post-consumerism, post-petroleum … which necessariy means post-growth, which necessarily means Descent.

Realize that we must change the vernacular, from Growth to De-Growth. I think we should talk Powerdown in every sentence when we praise solar panels. I think that every time we say Powerdown, we must attach the concept of De-Growth. We must help shift politicians who are dead-set on “creating jobs” to see that the conventional economy is dying, that crash of the old outdated systems is inevitable and already underway, and that Reskilling for the new economy, to create small local businesses in core needs industries is desperately needed right now. I think people understand it, at a very deep gut level; that what we’re doing is affirming that which they already know and don’t dare give voice to. Speaking to that deep truth is Skillful Means.

Does this sound like a survival economy? Perhaps because it is: Survival while maintaining relative levels of Peace. Survival, as far as humanity continuing to be able to exist on this overheated, depleted planet.

Rather than any powerful rally for creating economic overturn, what I read between the lines of Holmgren’s latest is his personal panic that we are almost beyond the point of having a choice.

Originally posted at Transition US

Why ECM is indifferent to traditional politics