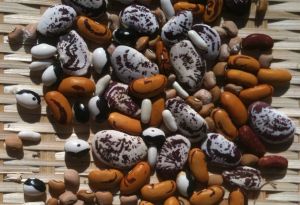 In so many ways, GMOs deplete any resilience in our food supply.

GMOs are perhaps the ultimate pinnacle of petroleum-dependent agriculture. These plants are laboratory-engineered specifically to work together with petro-chemicals: herbicides, insecticides, fertilizers. Headed into a world with increasingly less and less fossil resources, deepening the petro-dependence of our food supply is an absolutely disasterous course.

For thousands of years, humanity has fed itself “organically” — only your great-grandmother didn’t have a term for it. That was normal agriculture. This chemical-dependent stuff is very recent, widespread just since WWII. GMOs are the ultimate in UN-organic. The useage of farm chemicals with GMOs has vastly increased; it’s now producing SuperWeeds and SuperBugs which are resistant to chemicals, requiring stronger chemicals in greater and greater quantity.  And the chemical-centric agribusiness process is stripping out our topsoils, polluting our waterways, sickening our farm workers.

The long-term impacts of GMOs on human health are completely untested.  For many years the companies that produced GMOs refused to allow independent studies, and there has been no transparency of scientific findings.  The first independent, longer-term studies are just now beginning to emerge in Europe, and these studies suspect the GM process itself (not just the chemicals) is detrimental to those who consume it.  (YouTube) We can indeed have a better life than this.

Studies now prove that GMOs have not lived up to their producers’ claims of “higher yields” and “feeding the world”; indeed, the yields from small-scale, mixed-crop farms are higher.  The bountiful advertising promises of GMOs have not held up; instead it’s just about preserving an ongoing harvest of corporate profits.

GMOs are very different from traditional plant breeding.  In traditional plant breeding, two fairly similar plants — close enough related that they could breed and produce offspring in nature, for example yellow crookneck squash + green zucchini — are combined.  This is done in the natural way by combining plant pollen with plant reproductive parts.  The offspring might look different from the parents, but they’re all pure squash.

Genetic engineering has only been with us for a brief decade or so.  GMOs are created in a laboratory by blasting genetic material from a vastly different organism into a food plant’s seed to create a frankenseed. (fish + tomatoes, or bacteria + corn) Often a virus is added in the process, intentionally.  (Learn more)  You cannot save seed from a GMO plant — so it breaks the natural chain that farming has had for millenia … and locks farmers into contracts where they must buy seed, fertilizer, pesticides, herbicides instead of being self-reliant and saving their own seed for free.

GMOs raise serious economic issues and monopoly issues of corporate control.  In Washington state, they’re trying to label GMOs, so people can know what is in their food.  But big corporate interests are pouring mind-blowingly huge amounts of money into an advertising campaign that lies to voters (just like those same corporations did to smash our measure here in California last year).

TV advertisements here in California last year tried to claim that “labeling will make your food cost more.”  Funny thing how when labeling foods stands to make more corporate profits (for example “lower fat,” “new flavor” or “prize inside”), those same companies have no hesitation about changing packaging, and it doesn’t cost the consumer anything more!  Norman Braksick, president of Asgrow Seed Co., a subsidiary of Monsanto, was quoted as saying “If you put a label on genetically engineered food you might as well put a skull and crossbones on it.”  They are fighting labeling because they know it will cost them profits.

Meanwhile GMOs, and the related corporate control, are raping the heirloom seed heritage that our generation received from generations of natural plant breeders. The diversity of GMOs is extremely narrow, which places our international food supply in serious threat.  We have less and less diversity in the plant varieties that make up our food supply … right at the time when climate change dictates that we develop MORE diversilty in order to survive.

And GMOs are very difficult to contain – as evidenced by the accidental spread of GMO corn and wheat – the wind can carry GMO pollen to pollute the fields of farmers who intended to grow crops free of GMOs. That is why we must set aside physical areas which are GMO-free. We must create places where heirloom food plants can safely be cultivated and heirloom varieties can be preserved. We need this for the future of food and the survival of humanity.

In her explanation of The Great Turning, Joanna Macy says one of the things we can do is to stop further destruction— at the same time as we are building the new structures that we need for the future.  Here in Los Angeles, a coalition of food-and-garden activists, including Environmental Change-Makers and the Seed Library of Los Angeles, have asked L.A. City Council to make L.A. a “GMO-free Zone,” to create a 502 square mile zone (the City footprint) where we can safely save seeds of heirloom vegetables without fear of GMO contamination.

Want to do it in your community?  We share documents open-source online so that you can do it too.  www.SeedFreedomLA.org

Revolt and Change our lives

Powerdown: Let's Talk About It